We review products independently, but we may earn affiliate commissions from buying links on this page. Terms of use.

Though some Mac enthusiasts might argue the contrary, Macs aren't invulnerable. You need antivirus protection on your macOS devices. Sure, Windows and Android are much more popular targets, but Apple machines get hit with malware too, including nasty variants like ransomware. If you don't care to pay for antivirus protection on your Mac, consider Avira Free Antivirus for Mac. It doesn't cost a penny, and it did well in tests by the independent labs.

When you launch Avira's installer, it goes online to get the latest code and malware signatures. The main window features a simple menu down the left, most of which echoes the similar menu in Avira Antivirus and Avira Antivirus Pro. The rest of the window has plenty of whitespace around three main components: a round icon that reflects your security status, a big button to run a full or quick scan, and a drag/drop target so you can quickly scan specific files or folders.

On the Apple MacBook Air 13-Inch I use for testing, the quick scan took just a bit over a minute, and the full scan took 25 minutes. That's almost precisely the average among current products for a full scan.

Scheduled scanning is enabled by default, once per week. You can add more scheduled quick or full scans, on a daily or weekly basis.

Clicking Modules in the left-side menu displays the status of four security modules: Real-Time Protection, Protection Cloud, Firewall, and USB Scanner (the last is reserved for the Pro edition of this product). Seeing the label Firewall, you might get the impression that Avira includes a firewall component, like Intego, McAfee, and Norton. However, this component simply controls the built-in macOS firewall component.

There's a big range of prices for Mac-based antivirus support. At the high end, Intego lists at $99.99 per year to protect three Macs, and Symantec Norton Security Deluxe (for Mac) asks $89.99 per year for five cross-platform licenses. Granted, these two are security suites, going beyond what a simple antivirus utility offers.

The most common pricing plan among products we've reviewed is $39.99 per year for one license and $59.99 for three. As for Avira, you don't pay a thing. Like Sophos Home (for Mac), it's totally free.

You do need a modern operating system to use this antivirus. Avira requires macOS El Capitan (10.11) or better. If you're using an old operating system, you may need to consider a different Mac antivirus. Sophos support runs back to Mountain Lion (10.8), Webroot works on Lion (10.7) or better, and ESET Cyber Security (for Mac) goes all the way back to Snow Leopard (10.6).

When evaluating Windows antivirus utilities for malware protection, I use a wide range of tests that I've developed over the years. I don't have anything similar in hand for the macOS platform, as my many hand-coded testing tools are Windows-only. For Mac antivirus, I necessarily rely more heavily on the independent testing labs to know which products are effective. Fortunately, most of them do just fine.

Two of the independent antivirus testing labs I follow include macOS products in their testing, and both have Avira on their test roster. AV-Comparatives certifies Avira for malware protection, with the best possible scores. It achieved 100 percent protection against Mac-centric malware (to be fair, most of the products in this test reached 100 percent).

The experts at AV-Test Institute rate antivirus utilities, both for Windows and macOS, on three criteria: how well they protect against malware, how little they impact performance, and how carefully they avoid flagging valid programs as malicious. With six points available in each category, the maximum score is 18. Avira earned 5.5, 5.0, and 6.0 points in the three criteria respectively, for a total of 16.5 points. Others have done better. Bitdefender, Intego Mac Internet Security X9, and Trend Micro all earned a perfect 18 from AV-Test, as well as 100 percent from AV-Comparatives.

Windows malware can't infect Macs, but the Mac could act as a carrier, so AV-Comparatives also checks for detection of Windows-focused malware. Avira also managed 100 percent in this test, as did Avast, Bitdefender, Kaspersky Internet Security for Mac, and Trend Micro.

You may notice that there aren't any results in the table for Sophos, ESET, McAfee, and a few others. These products all earned high marks in past test reports, but the labs vary their product selection, and the latest reports didn't include them.

When I challenged Avira to clean up a USB drive containing the samples from my own Windows-centered testing, it finished quickly, eliminating 82 percent of the samples. That's better than most of the products I've tested in this way, though Webroot SecureAnywhere Antivirus (for Mac) caught 86 percent and Sophos managed 100 percent. In addition, Sophos jumped right in to scan the USB drive, without waiting for me to request a scan.

Protection Against Phishing and Malicious URLs

Phishing URLs are frauds that attempt to steal your login credentials by imitating sensitive websites. Phishing is a platform-agnostic crime—you can fall victim to fraud using absolutely any device that has a browser. That includes your Mac. Preventing access to such URLs, or to URLs containing malicious code, can be the first line of defense for an antivirus tool, whether it's Mac or Windows antivirus.

Avira Free Antivirus does not in itself protect against malicious or fraudulent URLs, but it does give users easy access to Avira's Browser Safety extensions for Chrome and Firefox. I installed the Chrome extension and proceeded to test Avira's browser-based protection.

For this test, I gather the newest phishing URLs I can find, especially ones that haven't yet been analyzed and blacklisted. I use one of my hand-coded tools to launch each URL and record results in three browsers, Chrome, Firefox, and Internet Explorer, each protected by the browser's own built-in protection. As for the Mac product, my analysis tool works strictly on Windows, so I test by hand on the Mac. I ran this test simultaneously with my test of Avira Antivirus and Avira Antivirus Pro on Windows.

For testing purposes, I discard any URL that causes an error message in any of the browsers, and any URL that doesn't actively attempt to capture login credentials. Analyzing the remaining URLs, the undeniable phishing URLs, I found that Avira's detection rate came at 66 percent, as it did under Windows. That makes sense; the Chrome plug-in that handles phishing protection isn't platform-specific.

That 66 percent score is better than the 47 percent Avira earned last time I put it to the test. However, it's in the bottom half for macOS antivirus utilities that include phishing protection. McAfee AntiVirus Plus (for Mac) recently managed 100 percent protection in this test. 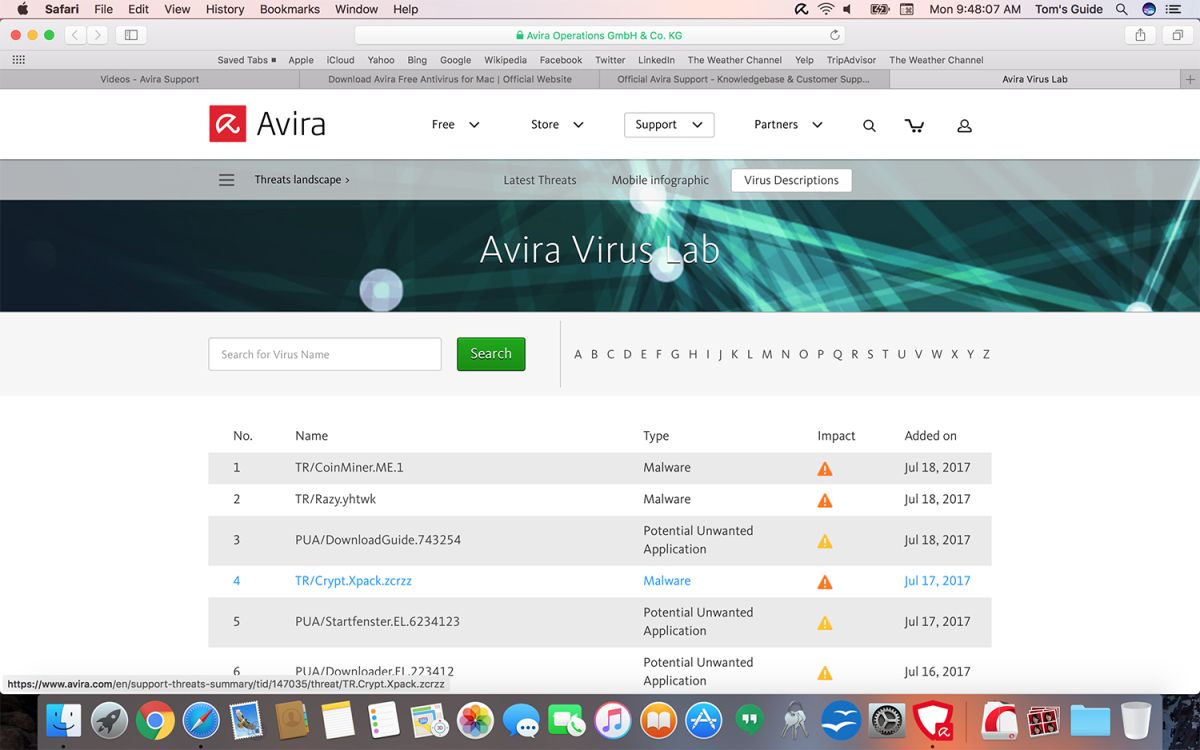 On the plus side, Browser Safety marks up unsafe links in search results, so you can avoid clicking them. It doesn't offer the detailed analysis that you get from Norton, but then, most of the time you don't need to see those details.

Should You Go Pro?

At the bottom of the main screen's left-side menu is a highlighted item titled 'Get Pro.' Clicking it gets you a laundry list of the virtues of the Pro edition. These include scanning USB devices, protecting emails, and full-scale phone support, along with more nebulous benefits such as 'award-winning shields against dangerous threats' and protection enhancement using 'smart learning algorithms.'

As with the free and Pro editions on Windows, perhaps even more so, the added benefits don't seem to merit the price. The free edition's real-time protection scans a file that enters your Mac via USB either when it's copied to the local drive or when it executes. Likewise, when you save or launch a malicious email attachment, real-time protection jumps into the fray. Personal tech support is nice—free users only get FAQs and community support forums—but not $44.99 per year nice. I didn't see a reason to review the Pro edition separately.

Having heard for years that Macs don't get malware, Mac users may find paying money for antivirus protection hard to justify. It's a false assumption—macOS malware exists—but that still doesn't mean that you must pay. Avira Free Antivirus for Mac does a decent job, and it doesn't cost a dime.

But you should also look at Sophos Home (for Mac). Like Avira, Sophos has certification from two independent labs. It wiped out all our Windows malware samples, beating out even its paid competitors. And in our antiphishing test it does much better than Avira.

If you have a little cash to splash on antivirus for your Mac, take a look at Bitdefender Antivirus for Mac and Kaspersky Internet Security for Mac. Both received certification from both labs, Bitdefender with all perfect scores and Kaspersky with near-perfect scores. Bitdefender includes such advanced features as ransomware protection for your documents and backups. Kaspersky is a full suite, with components including parental control and network protection. These two are our Editors' Choice products for Mac antivirus.

Bottom Line: Avira Free Antivirus for Mac costs nothing, and it gets good scores from the independent labs, but it's not the best free Mac antivirus we've tested.

From malware and Trojans to spies and identity theft, Avira Antivirus Pro for Mac gives you the protection you need to live the life you want. The quick and easy way to protect yourself from online threats – without all the hassle. Combining advanced heuristics with the power of cloud computing, Avira makes sure that you have the strongest protection possible. But you don’t have to take word for it, Avira’s antivirus technology is trusted by millions of users and consistently earns the praise of independent reviewing platforms.
Antivirus from the experts
Additional features are nice, but antivirus is what Avira for Mac do best. Rest assured that you’ll be protected by some of the most cutting-edge antivirus technologies available. Period.
It's not their business
Business is keeping people out of yours. Block online spies, snoops, trackers and trojans with Avira powerful Tracking Blockers and AntiSpyware platforms.
Share content, not malware
Avira’s NEW Antivirus Pro includes Network Protection that scans not only your files and folders, but also the ones you share with others. This way you don’t ever spread or receive malware.
Antivirus made simple
Developing antivirus software is complex, but using it doesn’t have to be. Pick the user-friendly antivirus solution that offers easy installation, automated scans, intuitive interfaces, one-click repair and a gaming mode that suspends notifications.
Note: 30 days trial version.
Also Available: Download Avira Antivirus Pro for Windows
Coments are closed
Free Movie Maker For MacDivx Player For Mac